Captain William Crush Daldy commenced seafaring life at age 18 in colliers of his father’s firm. On the death of his father, he struck out for himself as Third Mate on the troopship “Britain”. He later sailed for Van Dieman’s land as Captain of the schooner ‘Sharnrock’ trading between British ports and various parts of the world.

The first Customs House in Auckland was opened on the day Captain Daldy brought his schooner into the port of Auckland, July 1st 1841. Captain Daldy took home the first cargo of merchandise from Auckland in a schooner in 1845.

In 1847 he purchased land In the neighbourhood of Auckland and formed the the “Wholesale Shipping House” and trading company of “Coombes and Daldy” In 1858 he was elected a member of the second Parliament as representative of Auckland, becoming Minister of the Crown in the same year. He was later made Provincial Secretary and carried through a Bill for Aucklands’ first provincial loan of half a million pounds, (one million dollars). He also introduced the first Fencing Act.

He later acted as Agent for the Auckland Provincial Government(in London)and in that capacity was instrumental in sending out over 1,000 emigrants, most of who paid the bulk of their passage money, thus proving himself a very capable and efficient salesman for his adopted country. The first railway engine and material for the province was purchased by Captain Daldy on the home markets.

When the Auckland Harbour Board was formed, Captain Daldy was chosen as it first Chairman, a position he held for many years. In this capacity he was responsible for the acquisition by the Board of some 5,000 acres of harbour bed, a considerable portion of which has since been reclaimed, providing the Board with a considerable asset. In the original document, endowing the Board with the rights to the Auckland Harbour, the Chairman inserted the words “and it’s bed”.

Captain Daldy was the second volunteer to be sworn in for the coastguard, and was later unanimously elected to the rank of Officer Commanding. As a member of the Auckland City Council he was responsible for negotiation for the Western Springs water supply, and also for the formation of the Auckland Fire Brigade, of which he was Captain.

He was appointed a Justice of the Peace. a commission which he held for 30 years until he resigned. His thorough knowledge of Marine Law made him invaluable in this respect. He was a Trustee of the Auckland Savings Bank, a position he held for 40 years. After operating on his own in underwriting, Captain Daldy collected a few associates — Thornton, Browning, Henderson and Williamson, and conceived the idea of forming the N.Z. Insurance Co. (N.Z. Fire & Marine 1859 lnsurance Co.)

Various other matters were discussed at the fortnightly Board Meetings, and as the outcome of a dispute with the Union Bank of Australia .(the only Bank operating at that time) It was decided to form the Bank of New Zealand. This was done by Act of Assèmbly in 1861. Cáptain Daldy and James Williamson visited all the principle towns in New Zealand to promote both the Bank of New Zealand and New Zealand Insurance. This mission proved very successful.

Captain Daldy was induced by the Minister of War to take command of the Naval Brigade New Zealand Company. (Daldy’s Blackguards) With others, Captain Daldy later formed the. South British Insurance Co, of Which he was for some years a Director. 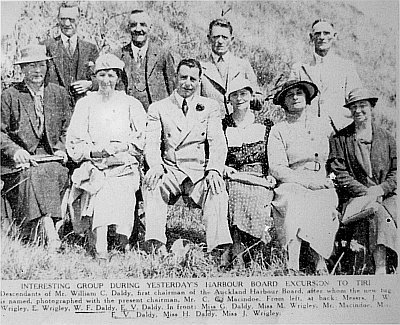